G’ afternoon my coin friends! Got some pretty cool news to report today:

OUR ONE YEAR NO-TRADE-STREAK HAS BEEN BROKEN! WOO!

I just received the above coin in the mail this week, which means our Trade Up game is back on track again! Where we keep *ahem* trading up until we get that dreamy $20 St. Gaudens Gold Double Eagle in our hands! :) It may take another trade or thousand to make it happen, but by golly we’re gonna try for it damn it. It’s all about the challenge with coin collecting, right?

Here’s more about this new coin…

Kindly sent in by Rich over at RedeemedFinance.com, this is a 1 oz of silver encapsulated 2015 Chinese coin. Approximately worth about $25 which can be found at APMEX.com, where our new pal picked it up from. Thanks so much Rich!

Here’s more about this panda per APMEX:

It’s nice and heavy (and shiny) too :) And it’s all yours if you want to trade for it! Hint hint…

The road so far…

This is the 3rd trade in our series, and was given in place of our 1945 Mercury Dime roughly valued at $3.00 – effectively giving us a 700% jump! BOOM! Here’s a picture of the coin Rich now owns:

This dime was originally traded to us by Matt R. in exchange for our no date Buffalo Nickel which was kindly gifted to us by my blogger friend Donna Freedman. And worth approximately 50¢:

So as you can see, we’re making some progress :) We’re still a good $1,500 off from the goal, but again – it’s all about having fun. And, for that matter, meeting new collectors!

So thanks for playing along, Rich. You’ve breathed fresh air into this game of ours, and I officially invite you to the Trade Up Party once we hit the mission ;) Happy collecting!

Want this coin? Let me know what you have to trade and we’ll keep it going! 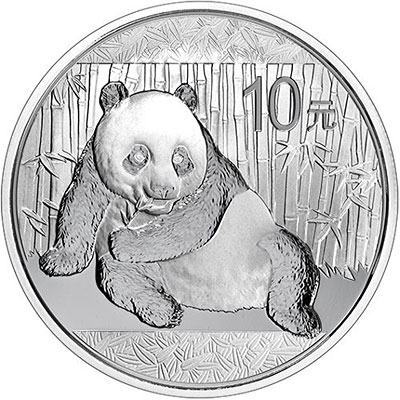 —-
PS: The coin comes in a capsule, and is graded BU (brilliant uncirculated) per APMEX. Though I did notice a smudge or two. It’s also all silver, there’s no black on it even though it kinda looks that way in the pics up top. It’s partly frosted and partly SUPER reflective!