You might have noticed I’ve been missing in action for a bit on this blog. But as fellow reader Matt pointed out in the comments a mere 7 hours ago, I have an excuse:

No post for a month? I know you just had baby money numero dos, but where are your priorities? ;-)

It’s true, I just had another little boy. Aptly nicknamed Baby Nickel, to go alongside his older brother, Baby Penny (can you tell I’m a fan of money?). I plan on making him a coin collecting extraordinaire in no time, so watch out :)

And speaking of beautiful nickels, I came across a note an old friend of mine sent me earlier in the year when she raided her daughter‘s coin jar. Apparently a Buffalo nickel was hiding in it!

Here’s a picture of the note: 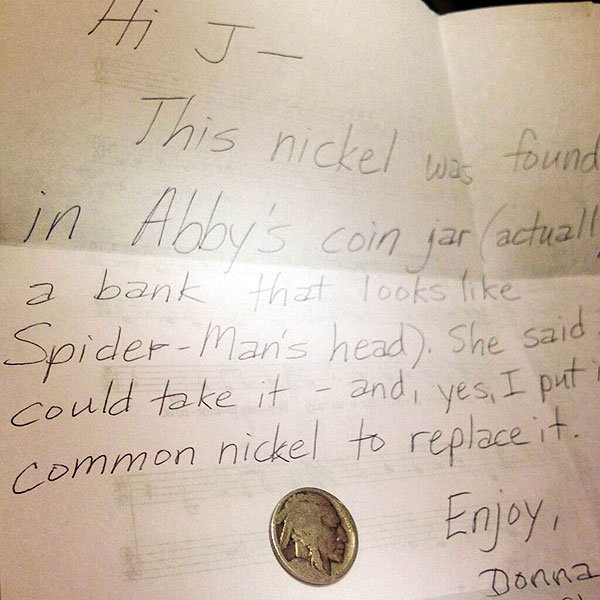 And here’s a closeup of the front and back of the coin:

As you can see it’s a little worn and without a date (fairly common with buffalo nickels due to its placement, and probably worth about 50 cents or a dollar), but regardless, it’s pretty cool to find in pocket change. They stopped making these over 70 years ago in 1938!!!

But you have to give me a different, more valuable coin in return…

The “Trade Up” Game

Have you ever played the “trade up” game? Where you take one object and then keep trading it for better, more valuable, objects until you’re left with something much bigger and cooler? Like that guy who traded a paper clip all the way up to a house?

That’s what I’d like to do with this nickel :) Only except for a house, say, maybe for my ultimate dream coin: a St. Gaudens Gold Double Eagle. How hard can it be?

So. If you like babies, buffaloes, or nickels, hopefully you’ll join me in this adventure. I’ll keep a running total of all the trades on this page, along with pics and links back to anyone who trades me (see, you’ll become famous too! what’s not to love?), and we’ll see how far we get with this thing. At the very least I still get to keep my baby, right?

Hope this satisfies your itch, Matt :)