Picked up a few interesting pieces this weekend while out yard saling! One of which threw me for a loop – that beautiful Susan. B. Anthony dollar pictured above.

As I do at all yard sales, especially ‘estate sales’, one of the first places I check out are the jewelry boxes. Mainly because the most expensive stuff is usually in there, and every now and then you get lucky with coins too. Either single ones just hanging out in there, or those that used to go around women’s (men’s?) necks as pendants. Such was the case with this Susan B. in question.

The jewelry boxes were right when you walked into this place, and sitting smack in the middle of the top row was this Susan. B. dollar coin just asking for me to pick her up ;) And as I did, I noticed two things: 1) She was in a clasp that was once worn as a necklace, and 2) SHE WAS GOLD??? Which took me a good 10 minutes walking around with her in my hand to even figure it out (for those unaware, Susan B’s are of silver color, made of copper and nickel (not real silver)).

I knew it looked *different* but I just couldn’t put my finger on it until I searched eBay with my phone and realized what I had: a 24k gold “plated” Susan B. Anthony dollar. Not as exciting as a SOLID gold dollar, but still. Different! And worth more than $1.00, even if just by a couple :) In fact, it’s quite possible the bezel that holds the coin is worth more than the coin itself, depending on what that’s made of. But I’d imagine that’s not gold either…

At any rate, I found the leader of the sale and asked  how much it was.

“It’s a pendant with a dollar coin in it. So you better charge me at least a dollar!” – I quip back ;)

“Ummm… Let me think about that. Not sure I want it that bad…” I hesitantly say. Which I do in ALL cases no matter if it’s true or not, since you can never let them know your true excitement ;)

I take another walk around the house seeing if there’s anything else I’d be interested in, and then I come to the guy once more and ask if he’d take $3.00 – which at this point I’m fairly confident it’s all its worth anyways. He gives a chuckle and says something about me trying to rob him, which is funny since a moment earlier he had no idea what it even was. I tell him it really isn’t worth that much as I looked it up on my phone, and he promptly accepts my counter-offer and we call it deal.

Before I leave I also find a couple other goodies I’ll show below, but something even more interesting I found out on my way out was that the guy’s mother used to wear it around all the time. Who’s now deceased :( It’s the second coin pendant I’ve picked up now in my 2 years collecting with the same history, and in a way it kinda freaks me out… Not that I wouldn’t still buy them up (perhaps that the only way we’re able to anyways? Once they pass on and their estate gets liquidated?) but it is creepy to think about.

Anyways, it’s now in my collection and made for an interesting experience :)

Here’s the Gold Plated Susan B. Anthony compared to the Silver one:

And then here was some other cool things I picked up at the estate sale too. The first I found in a drawer of a table for sale, and learned the former owner of it was once a postmaster general! 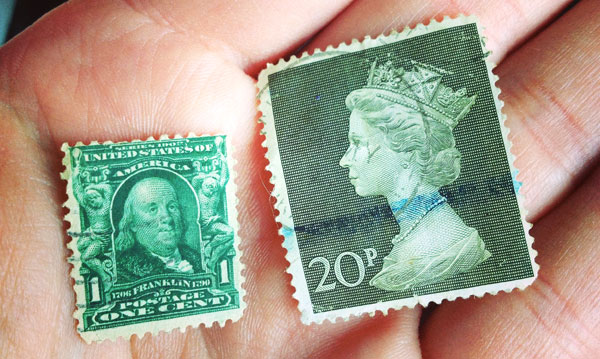 I had absolutely no idea what these were worth when first picking them up (that’s half the fun of it right there!), but I figured I couldn’t go wrong with paying just a buck for ’em. And after researching a little I’d be lucky to even get that, haha… I could have struck it rich though!

Here’s what I (think) they are, using my new Stamp Blackbook for the first, and then good ol’ Google for the second… I’m just starting to learn more about “philately” and the art of stamp collecting:

[If you like stamp collecting, or are a collector yourself, check out this article I did over on my other site that showcases a collection I picked up for only $20 a couple years ago! I have hundreds, if not thousands, of old stamps I still gotta figure out! :)]

Later in the morning, I then come across the following in my change back at a yard sale!

My very first star note found in circulation! WOOHOO! And the serial number is pretty low too starting with two 0’s right off the bat… According to MyCurrencyCollection.com it was the first run series of the replacement notes, and printed in Fort Worth, TX in February 2009 which is kinda cool. Especially since it has a date of 2006 on it :)

If you recall from my last article on star notes when I got that batch of $5.00 bills from a friend, these star notes are “replacement notes” which are printed to replace imperfect notes that were shredded. They’re not worth that much more than face value (maybe 50%-100% more?), but just like everything they’re pretty fun to come across – especially in the wild.

So a busy Saturday for my hobbies! Hopefully yours was enjoyable too!

——
PS: I was playing around with instagram filters up at those top pics of Susan B… Thought they looked kinda cool, yeah?