Hey guys! It’s been a while since we did our last “9 Questions” so we’re picking it back up today with my friend, and fellow finance blogger, Eric Rosenberg of Narrow Bridge Finance.

It’s always interesting to see how people got started in the hobby and what they collect, so hopefully you enjoy this series as much as I do. If you’d like to participate in it yourself, just click here for more info and would be more than happy to feature you :)

My favorite coin is my 1909 VDB penny. 1909 was the first year of the Lincoln head cent we all know and use regularly, which marked a big change in the USA one cent coin. The Lincoln head has now been used for over 100 years. VDB is the initial of the artist who created the Lincoln portrait on the coin, which was not added on all 1909 pennies minted that year. The circulated one cent coin is worth over $6.00, that is more than 600 times the face value!

I had a friend in elementary school who was a coin collector, and I went with him and his dad to some coin collecting shows and the local ANA meeting. I picked up the most recent Whitman coin folders for pennies, nickels, dimes, and quarters and started filling my albums with coins from my pocket (and that I dug out from my parent’s pockets, purses, and coin jars).

That friend and I started a coin collecting club at my school, and I never stopped collecting!

The best coins I found in circulation were because I worked as a bank manager for a while, and I got the best picks from the teller drawers. I found a couple of Buffalo nickels, which is pretty awesome.

I am more into finding coins in circulation or hunting in bank rolls, so I never spend much to fill specific spots in my collection. I paid more than $5 for that 1909 VDB penny and about $3 each for 1981 Susan B. Anthony dollars to finish my SBA collection.

Most of my coins were from bank rolls, so almost all of my coins were a great bargain at face value. I filled in almost every Kennedy half dollar ever in my books by picking up a box of .50 coins at the local credit union. That’s a deal to me!

I usually just collect to fill my albums; I’m not out there buying, selling, or trading very often. I have been tempted, but never really gave in. I made a few bad trades in my younger days as a sports card collector, and that pretty much scared me away from doing that with any collection.

I like circulated United States coins. They are fun to search for and cheap to collect. It is a great way to enjoy the hobby. I’m having a tough time getting some of the more rare coins filled in, and my albums are getting full, but I still get excited when I find something I’ve been searching out for years.

If you are just starting out, don’t spend too much money at once. 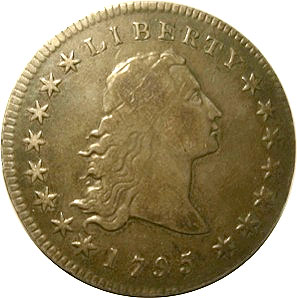 The most valuable coin I know of is the 1794 Flowing Hair silver/copper dollar. That coin is worth $10 million! If I could get my hands on one of the most rare and oldest United States coins is existence, I could sell it and retire!

Eric Rosenberg is a finance blogger at Narrow Bridge Finance, where he shares finances advice for young professionals from his experience working in banking and paying off giant student loans. Be sure to check out the personal profitability project to get started!

Want to read more interviews like these? Click here.
Want to be the next person featured? Answer our 9 questions and we’ll make it happen!