I picked up a beauty this week, friends! An 1834 “bust” half dime. Because America was too cool for nickels back in the day, haha… And they apparently liked their coins small!

These things have to be some of the tiniest coins the US ever made, which made my pictures here come out a little fuzzy – sorry about that. You can’t really tell, but it’s resting on a drink coaster with little square tiles which I had to zoom right in. Though it doesn’t beat our 1836 1 & 1/2 pence piece from Great Britain last year! That guy was tinyyyyy…

I picked it up off a friend in a total deal valuing around $185. He got 18 coins + an old $2 bill, and I got the one :) But it made for a great win for the two of us: He now has 19 items to sell in his little shop, and I have one more 19th century coin that I was missing for my collection. And better yet – I got “rid of” more stuff from my Trading Binder that I no longer need to find a home for. So it was a win for minimalism too!

Here’s everything I traded: 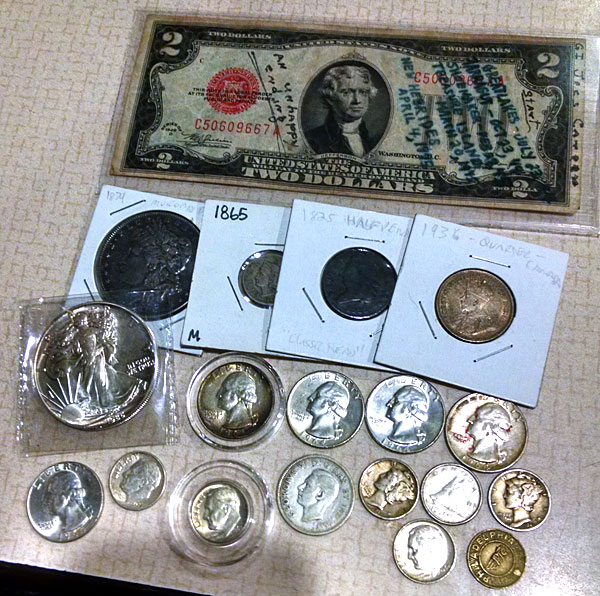 After the deal was done, my friend was quick to point out that he only paid $20 for the coin to rub in what a great deal he got (he works for a dealer). But I wasn’t too phased – I quickly shot back that I got most of mine for free ;) A perk of helping people liquidate their collections. You get to keep some of them for yourself!

Speaking of which, my dad’s old mini collection of Morgan Dollars? I ended up selling them to a Morgan Lover/Collector for $500. And then the silver Eagles for $20 a piece to people in my coin club. They’re one of the best places to sell and trade coins!

Anyone else pick up any cool ones lately?