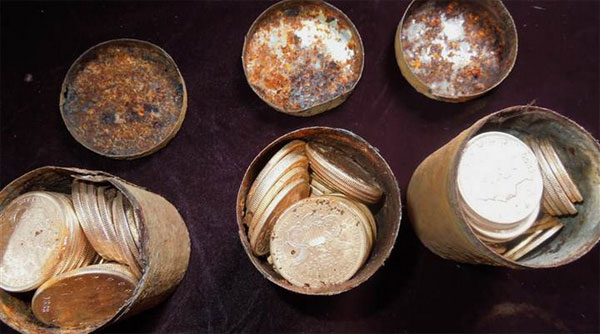 UPDATE: These Saddle Ridge gold coins are now up for sale @ Amazon!

Imagine this: You’re walking your dog around your OWN yard, and it doggy digs a hole right into a pot of gold! Full of double eagles over 150 years old!! WOWW!!!

Okay, well I don’t exactly how much the dog was involved with this story, but a California couple DID indeed just stumble across a ton of cans full of uncirculated gold coins on their own property. While taking their dog on a walk (maybe the husband was doing the doggy digging? ;))

According to NBC News, here’s exactly what they found:

“Nearly all of the 1,427 coins, dating from 1847 to 1894, are in uncirculated, mint condition… Although the face value of the gold pieces only adds up to about $27,000, some of them are so rare that coin experts say they could fetch nearly $1 million apiece.”

Halfway poking out of the ground too near a tree – I can’t even imagine… Except maybe while dreaming. But usually in those you try and pocket as much as you can knowing full-well you’re about to wake up and won’t be able to take them with you! Haha… (Don’t you hate it when that happens btw? Like, you KNOW you’re in a dream so you try and hide them into a “secret” place that you can find when you wake up, only it’s never there when you do? Or is that just me?).

Anyways, hat tip to my boy John from FrugalRules.com for tweeting this to me tonight…

I wonder if this new hoard will mess up values on all the others going forward? I mean, if a few of those coins are “so rare” they’ll fetch close to a million dollars, wouldn’t that mean those others out there wouldn’t be *as* rare now? Like, maybe they were worth $3 Million but now only $1 Million cuz of these new guys in the game? I’m no expert, but I feel like 1,500 new gold coins in circulation – and, GOOD quality ones – could tip the tables a bit. Not that I have any (yet) to be worried about ;)