Welcome to another exciting round of “9 Questions!” Today we chat with Brent from AllAboutInterest.com, where we learn all about his interest in coin collecting ;) Enjoy!

1. What’s your favorite coin in your collection?

My favorite coin is an 1853 Liberty Gold Dollar.  This coin is actually mounted inside of a 14kt gold ring that I purchased from my Baptist preacher when I was about 15 years old.  I believe I only paid $80 for it.  This was probably the first coin I owned of significant value.

2. How did you get started collecting?

I’ve always loved collecting, whether it was baseball cards or Hot Wheels.  I love the hunt for that rare piece or the one item that is missing in your collection.  I picked up coin collecting after inheriting some walking liberty half dollars from my mother and a collection of wheat pennies from my grandmother.  I also love money so it was just natural to collect it I suppose.

I first started collecting U.S. silver coins, mainly coins minted 1964 or earlier. Coins of this age contain 90% silver. I wasn’t just buying junk silver but also coins in decent condition for their numismatic value. One of the exceptions to the silver coins are the Kennedy Half Dollars that were minted from 1964-1970 plus the 1776-1976 commemorative. The 1964 Kennedy does contain 90% silver and the rest of these contain 40% silver. Even with 40% silver, this increased the value of these coins considerably.

So one day I went into my bank and asked to buy all of their half dollars from their vault. I ended up with a bag of over 100 half dollars. I had at least 30+ Kennedy Half Dollars in this date range! These coins that I paid $0.50 for were worth 7-8 times that value at the time. This was a couple of years ago when silver prices were a little higher. I sold a few that were in worse condition to recoup my investment and kept the rest.

4. What was the most you’ve ever spent on a coin? 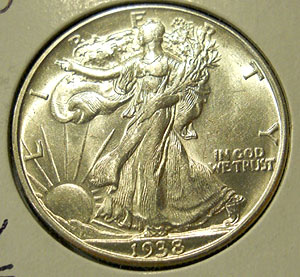 When I received the coins, that 1921 half dollar was in much better condition than I originally thought. It probably would have graded up to EX-40. I wish I had kept the coin but I ended up flipping it for $500 and keeping the rest of the lot. I wish I had sent it in for grading as it could have been worth over $1,000.

6. Have you ever been ripped off?

I’m happy to say I’ve never been ripped off. I buy from reputable dealers and sellers online with great feedback.

7. What’s your favorite type of coin to collect?

8. What’s one piece of advice you could share with us today?

Start small and learn to grade coins yourself. I bought some cheaper graded coins as examples and studied them for flaws so I am better able to determine value and grades of these coins. Also watch out for “cleaned” coins. Some sellers will polish or clean coins to make them look better. This can ruin the value.

9. If you could own any coin in the entire world, which would it be?

A mint state 1921 S walking liberty coin. It’s valued around $30,000. I know there are more valuable coins out there but this one would be the star of my collection.

——–
Brent is an avid blogger and investor in dividend growth stocks as well as real estate. He writes about his investments and keeps a portfolio in real-time on his blog. His blog can be found at www.allaboutinterest.com.

Want to read more of these? Click here.
Want to be the next person featured? Answer our 9 questions and we’ll make it happen!