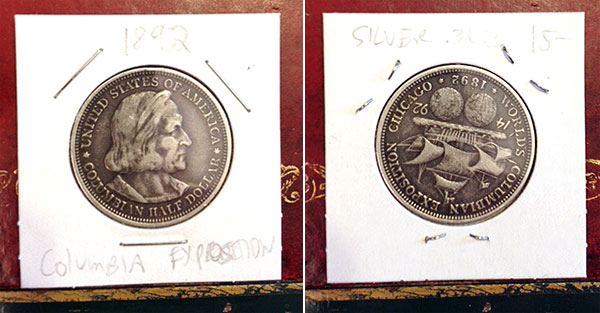 I was moving some coins around from my “Binder” collection, and as I picked up this 1892 Columbian Exposition Commemorative half dollar, I realized the reverse (back) of it was rotated a little when I didn’t think it should be. I quickly grabbed another Columbian half I had laying around, and sure enough it was different!

These coins, as many are, are supposed to align up perfecting – up and down – and as you can see from this pic above, the reverse most definitely tilts to the right (it’s supposed to be upside down btw, just not rotated). A pretty interesting find to what’s normally a pretty usual (and common, believe it or not) coin. So many people saved these coins back in the 1890s that they’re pretty easy to find. And cheap too – anywhere from $10-$100 usually, depending on condition. With the sharpest coins fetching into the lower $1,000’s.

Now, how much this “die rotation” error affects the value, well, who really knows :) I came across a site specifically geared towards these rotation-type coins – RotatedDies.com – and it looks like collectors really only care about those rotated at least 90-180 degrees. Which mine surely isn’t (my veteran collector friend says 25% and up usually gets a premium too, but I’d probably peg this coin at around the 15-20% mark?). Oh, and a “die” btw, is one of the two metallic pieces that are used to strike one side of a coin, and contains an inverse version of the image to be struck on the coin. You can learn more about that here if interested.

Die rotation aside, I valued this Columbian half at around $15 originally (I picked it up off eBay last year for $12), but with this new information I’d probably add a couple dollars to it and see if I could get away with it :) It’s all about finding the right collectors when selling or trading your coins, really, so why not? Who knows who’ll get hot and bothered by such a finding, haha…

Here’s a quick history on this coin, btw:

The Columbian half dollar is a coin issued by the Bureau of the Mint in 1892 and 1893. The first United States commemorative coin, it was issued to raise funds for the World’s Columbian Exposition, held in 1893, and to mark the quadricentennial of the first voyage to the Americas of Christopher Columbus, whose portrait it bears. The Columbian half dollar was the first American coin to depict a historical person.

Probably another reason so many people saved these coins – it was the first “commemorative” made! And we’ve had hundreds produced since, most recently the curved National Baseball Hall of Fame coin. Sold out within days!

Hope y’all are finding some cool stuff out there too :)