This is the most recent addition to my collection :) And the story behind it is pretty interesting…

A few weeks ago I came across a new (to me) financial blog, and as a coin collector I really liked its name: 2-Copper-Coins.com. At first I was just paying attention to the articles and enjoying a new take on money – it’s written through the eyes of a pastor working towards financial freedom! – but after a while I got curious about the name.

So I emailed the blogger, Jon, and he explained that the name came from one of his favorite bible stories where a widow gave all that she had and was commended for it by Jesus. Even though it was technically less than what the wealthy had given:

[41] Jesus sat down opposite the place where the offerings were put and watched the crowd putting their money into the temple treasury. Many rich people threw in large amounts. [42] But a poor widow came and put in two very small copper coins, worth only a few cents. [43] Calling his disciples to him, Jesus said, “Truly I tell you, this poor widow has put more into the treasury than all the others. [44] They all gave out of their wealth; but she, out of her poverty, put in everything—all she had to live on.”

Awesome foundation to build a blog on! I had heard the story before as a fellow church goer myself, but for some reason I never put two and two together. I then asked Jon if he’d do a guest post for me over at my finance site so we could share his cool story with my audience. He was kind enough to agree.

That all happened about a week ago, and then yesterday morning I received the first draft from him and proceeded to polish it up and put it on the schedule to go out soon (this up and coming Thursday – I’ll link back once it’s live if you’re interested in it).

Here we are: “God Will Take Care of Me”

The thought crossed my mind to Google what type these “2 copper coins” exactly were so I could try and get one one day, but my ADD kicked in and I promptly forgot and went about my business for the rest of the day…

This is where it gets cool. Well, at least to me ;)

Later that evening, I hit up our local coin club early to do a little trading (the best part of the club!) and I work out an $80 deal with one of my closest friend in the group (more on that later) and we start trading away. I find about $72 worth of coins I want from him, but I’m still short $8 in my favor. I open up his coin binder one more time to see if there was anything else I had missed, and sure enough this “Widow’s Mite” jumped out at me.

The coin club ends and I head home to (of course) look more into my new finds. I look again at this crazy rectangle-ish thing, and decide to Google “Widow’s Mite” to see exactly what I was the new owner of.

And this is what I get! (From Wikipedia)

The Lesson of the widow’s mite is presented in the Synoptic Gospels, in which Jesus is teaching at the Temple in Jerusalem… In the story, a widow donates two small coins, while wealthy people donate much more. Jesus explains to his disciples that the small sacrifices of the poor mean more to God than the extravagant, but proportionately lesser, donations of the rich.

Wait a second…. Could these be THE 2 copper coins I had been wondering about this entire past week??? Which I forgot to research and then RANDOMLY picked up in a last-minute coin deal??? Come on!

Well, as you have probably guessed at the beginning of this article, indeed it was. I mean, probably not THE exact coin that that widow had donated, but the type of coin at least… Though you never really DO know, do you? That’s the fun about coins – they could have passed through anyone’s hands during its time! What if this one was Jesus’? ;)

To put it mildly, I was blown away. And quite frankly think the Big Man upstairs was trying to tell me something with this one… Like, perhaps to get back to church again, haha…

Anyways, here’s a better look at what these coppers/mites/leptons look like: 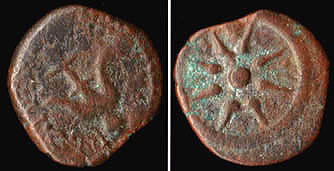 Two mites (Greek lepta) are together worth a “quadrans” which is the smallest Roman coin. A “lepton” was the least valuable coin in circulation at the time in Palestine, and it was worth about six minutes of an average daily wage. Again, all according to Wikipedia.

So there you have it. I now own a coin that may or may not have passed through the hands of Jesus Christ himself – woo!