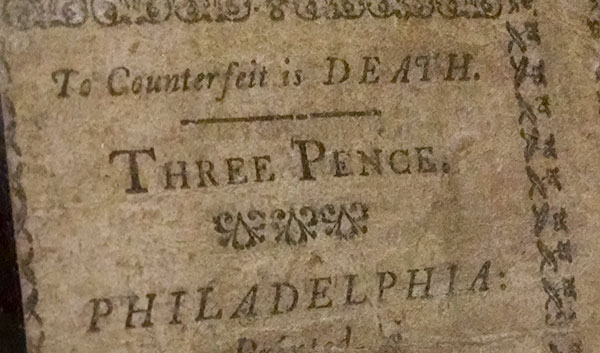 How’s that for discouraging counterfeiting :)

I saw this line at the top of an old colonial note a friend had shown me, and the more I looked at it the more I thought it would be cool to own in my collection. So we made a trade!

In fact, I ended up with two of his old colonial notes:

This is what I love about trading and numismatics – you never know what you’ll end up with (or what will excite you!) when you meet with other collectors.

I had no clue I’d wake up the next day owning these guys, nor did I know anything about this period in our history either. And since we both got rid of items we no longer cared for (I liked the Egyptian coin, but not enough to keep in my “good” collection, and my friend had plenty of these notes in his so was fine giving up a couple) it was a win-win all around.

I know I’ve said it a thousand times before, but if you like trading and learning about different aspects of the hobby, DO check out your local coin club! They’re full of big brains as well as collections! :)

Here’s the pictures of everything we traded below… Hope your collecting has been going well!

(I have no idea which is the obverse and the reverse, so just showcasing them below in the order of pictures I like the most ;) And this goes for all notes and coin listed below for that matter – I’m not well versed in any of them!) 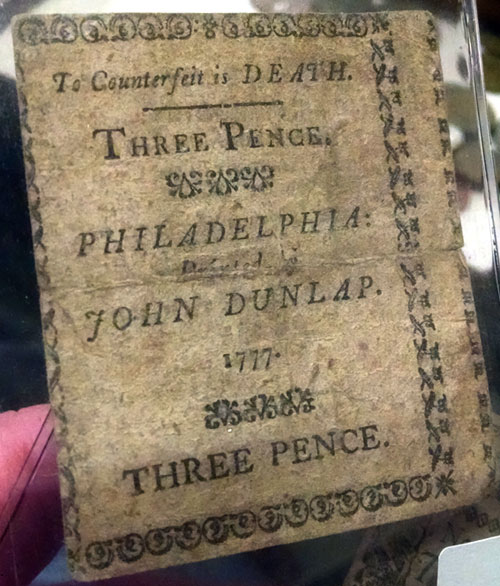 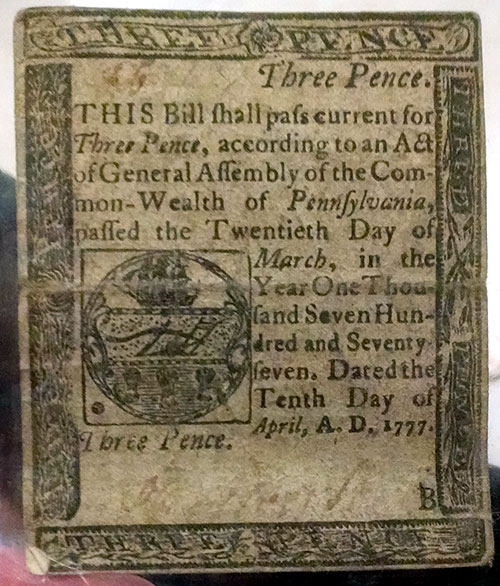 Three Pence. / This bill shall pass current for Three Pence, according to an Act of General assembly of the Common-Wealth of Pennsylvania, passed the Twentieth Day of March, in the Year One Thousand Seven Hundred and Seventy-Seven. Dated the Tenth Day of April, A.D., 1777. / Three Pence.

(If you’re wondering about the cut on this as I was, my friend says it’s because at some point they had to make these notes rendered null and void, so the way in which they did this was to cut out a piece from it. I tried to Google it but seems like all the cancellations I saw were holes or diamonds and not triangles off the side?) 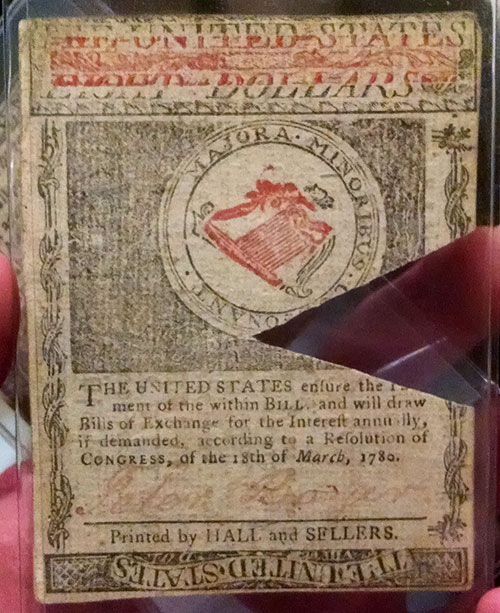 United States / Eight Dollars / The United States ensures the ____ment of the within Bill. And will draw Bills of Exchange for the Interest annually, if demanded, according to a Resolution of Congress, of the 18th of March, 1780. / *Signature* / Printed by HALL and SELLERS. / The United States (upside down) 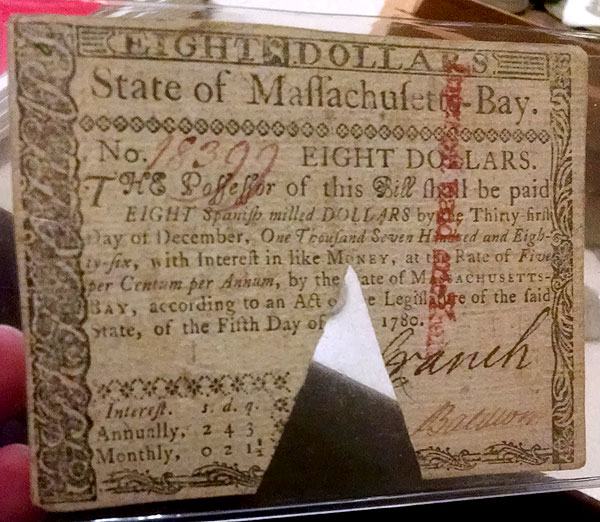 Eight Dollars / State of Massachusetts-Bay. / No. 18399 Eight Dollars. / The Posessor of this Bill shall be paid EIGHT Spanish milled DOLLARS by the Thirty-first (?) Day of December, One Thousand Seven Hundred and Eighty-six, with interest in like Money, at the Rate of Five per Centum per Annum, by the state of Massachusetts-Bay, according to an Act of Legislature of the (fair?) state, of the Fifth Day of _____ 1780. / *Signature* 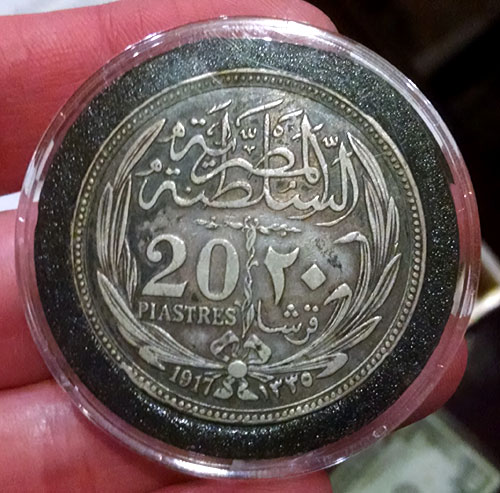 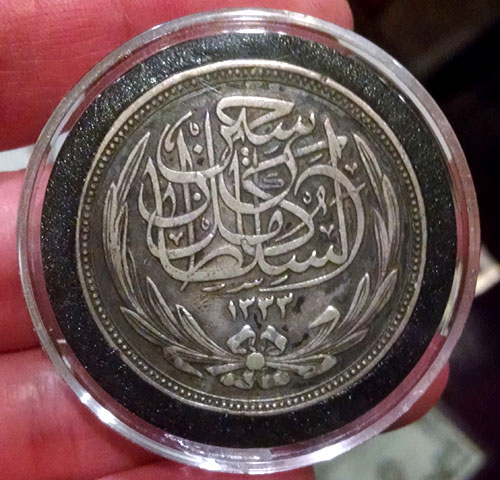 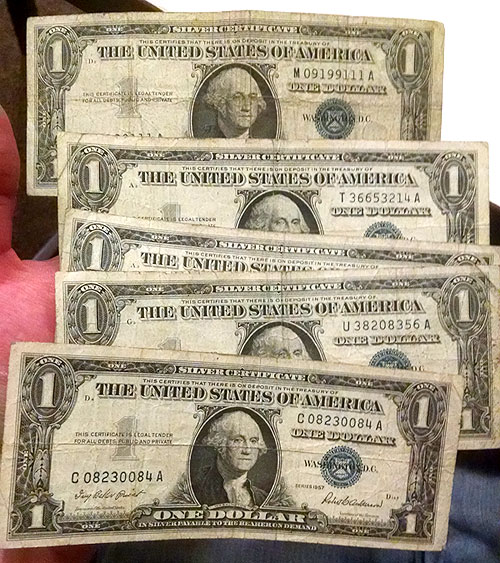 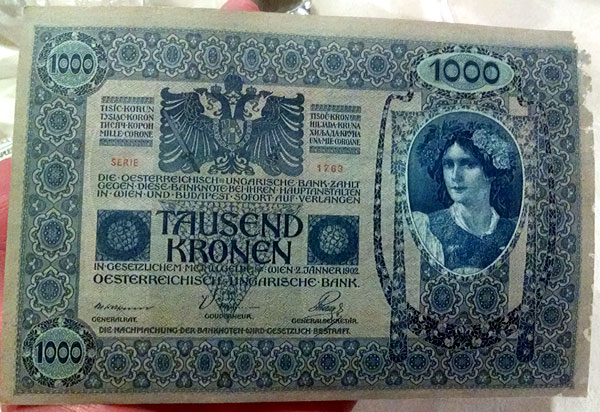