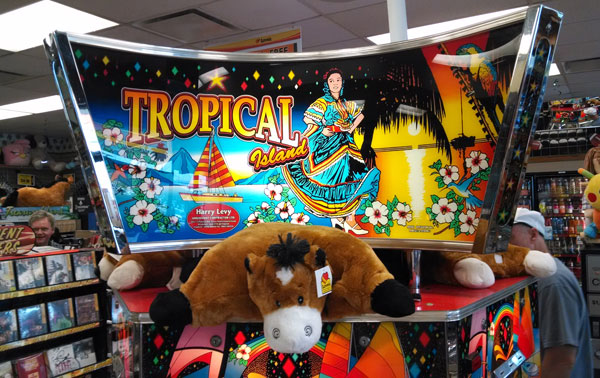 Good afternoon fellow coin lovers! Whatchy’all been up to lately? Get any kick-ass coins while I’ve been away? Tell us all about them in the comments below. Or better yet, be our next “9 questions” interviewee :)

It’s been a bit quite here on Coin Thrill which I must apologize for (sorry!), but I have no plans on going away forever, and for the next few months I’m going to work on putting out at least 1 new post a week here as my love for collecting is only growing behind the scenes. If I had it my way I’d just blog about coins and currency all day long, but sadly that doesn’t pay the bills. Unless one of you would like to become an investor of this site? ;)

Anyways, I’m back now and ready to rumble. And you won’t believe what I saw on a pit stop down to the beach last week.

Old (and fake!) coins in one of those *tilt* arcade games!!

Hahaha….. What on Earth??? At a rest area/convenience shop?

I’d like to think it’s yet another way the ANA is trying to get the youngsters more involved into collecting, but of course that’s probably not the case. If a real collector was behind this they’d probably be shaking their heads… Who gives a way fake coins as prizes?? They know very well that the kiddos trying to score them think they’ll be worth some good money, but sadly they’ll be disappointed…

If you’re not familiar with how these tilt games work, the idea is to pretty much drop (real) quarters into the top of it, which you then hope drop down and nudge the sea of coins and prizes to push a few over the cliff and into your pockets. Some states just give you tickets when you win instead of the actual quarters that fall down due to legal/gambling laws, but it looks like this one let you keep them – or at least I assumed so since you could get those old coins as prizes too?

Here’s a full pic of the machine to show you what I’m talking about: 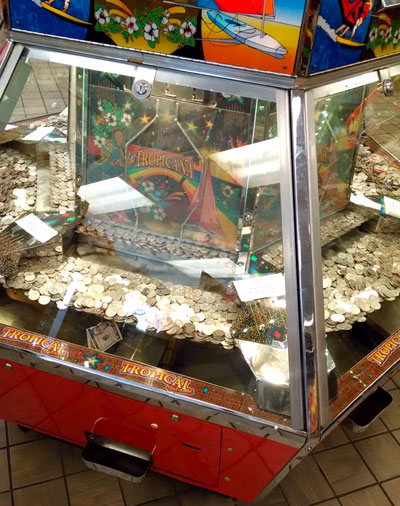 Now onto all the stuff I found in there! It was quite the delight to stumble upon while stretching my legs on a multi-hour road trip. With screaming kids who were all hungry ;)

The real (and fake) coins I found in the arcade: 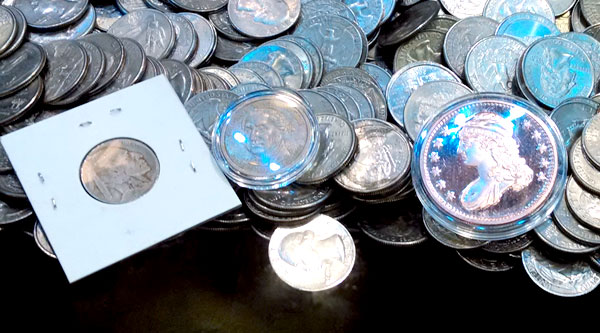 As you can see there were three coin-related products you could win in this particular section, and only two of them were real (besides all the quarters surrounding them :)).

Here’s what I found: 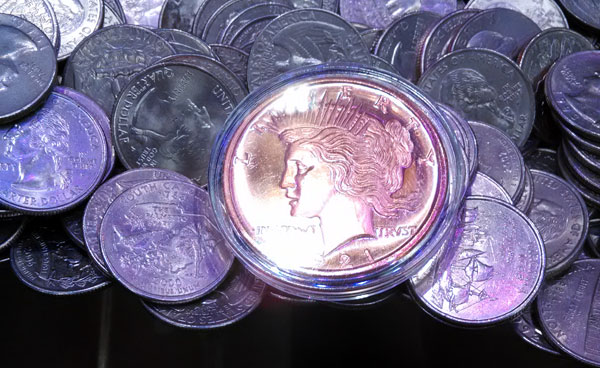 This one as you can see is a 1921 [FAKE] Peace Dollar. Everything looks real about it (at least from where I was standing and peering in), only it had that fake gold coloring over it like the fake Capped Bust Dollar mentioned above. You can kinda see it if you compare it to the silver-colored quarters around it. So either this is a real coin that happens to be colored over (highly doubtful), or it’s just a replication all around. I’m going with the latter :) 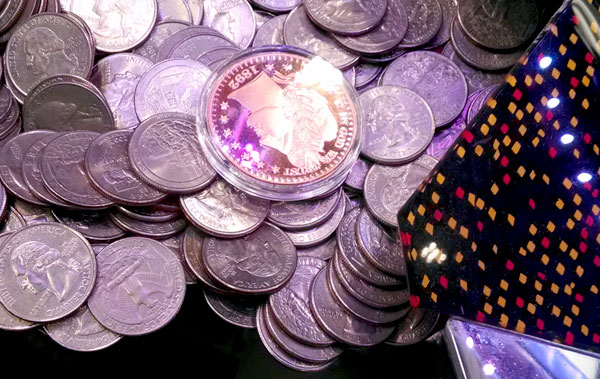 Next up you’ll see a [FAKE] 1882 Barber Silver Dollar. Also toned that fake gold color, as well as crazy big dentils (I think that’s the right word?) all around the circle there. In 1892 there were only Morgan Silver Dollars anyways, so again they enlarged the Barber Half to appear to be a silver dollar. It does look a lot cooler than the real ones though, I might add :) 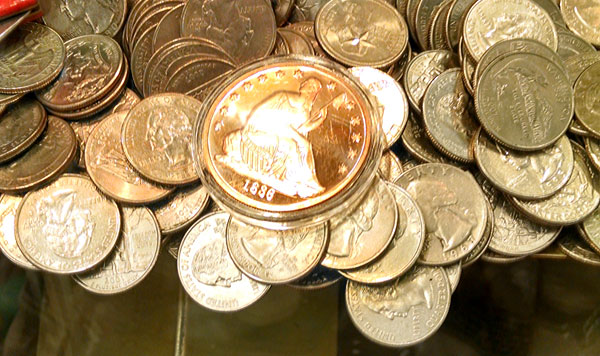 The pic is kinda crappy, but you’ll see another faker here too – this time an 1936 Seated liberty Silver Dollar. Which did exist back then, only not until 1840 ;) (Man I love that Red Book – gives away all the secrets to these coins! Haha…). And just like the others, this coin was also colored in that crappy gold covering. 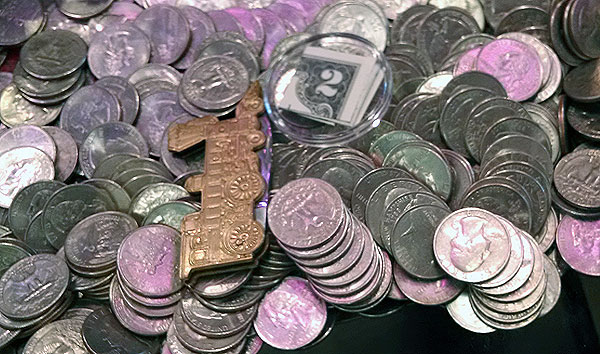 Well look at that! A REAL $2.00 bill! Haha… Which a lot of people actually think is fake, funny enough ;) It’ll take a lot of quarters to get that bad boy down off the cliff, but at least it’s something you can spend in real life. 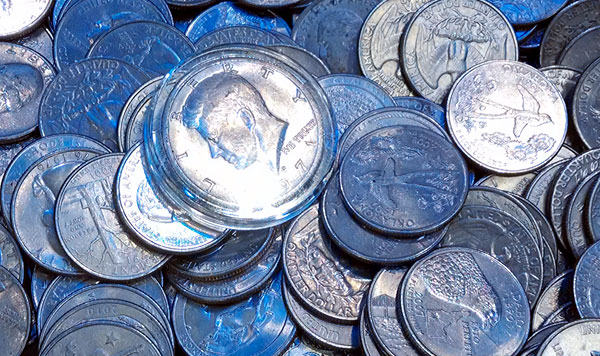 And lastly, a real 1971 Kennedy Half Dollar. Worth exactly 50 cents, and a favorite among modern collectors. Truthfully, I’d rather try and get some of those quarters to drop and see if any are pre-1965 full of silver! Unless we’re talking about the new GOLD Commemorative Kennedy Half that just dropped… Things always sparkle more when solid gold ;) The REAL kinds…

So that was my latest discovery… Definitely interesting, and definitely random.

Would you try to win any of them??