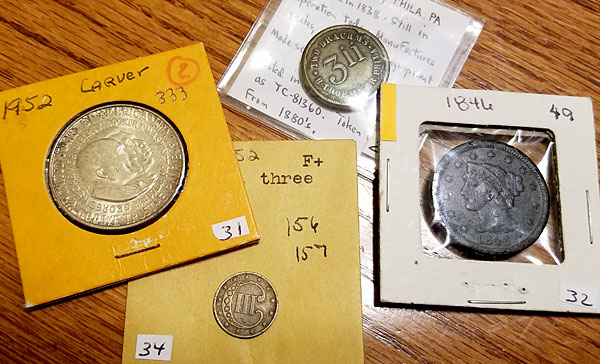 As much as I love (and collect) older U.S. Coins, it seems all I’ve been picking up lately here – and sharing – is foreign stuff. Well, that changed last week I picked up four (that’s right, 4!) vintage American coins at a coin club auction!

Here’s what I got:

I’ll probably keep the penny and the token (I love the history behind it! See below!), and then trade away the rest to my friends if they’re interested… If not, it’ll be nice to look at fresh coins for once than my older stuff I keep trying to pawn off on people, haha…

Here’s a little more about each coin, along with closer shots. 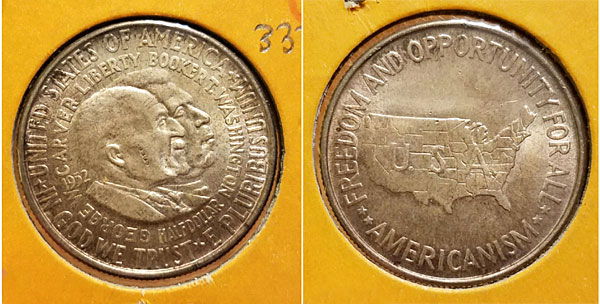 These were the last of the older commemorative half dollars that came out of the U.S. Mint, following 30 years until they started up again for more of the modern stuff.

The front features two prominent African Americans, Booker T. Washington (lecturer, educator, and principal of Tuskagee Institute), and George Washington Carver (the agricultural chemist famous for improving the uses of peanuts!), and on the back a design of the U.S.. With “Freedom and Opportunity For All” at the top and “Americanism” at the bottom.

They were sold to raise money “to oppose the spread of communism among Negroes in the interest of national defense” and they came in sets, as well as single coins. I believe this one I got here was the single version type (though who knows – maybe someone popped them out of the case to distribute separately?) and I ended up paying $8.00 for it. The Red Book has it listed at $18.00 for this condition so I thought it was worth adding to my “trade” collection :)

I’m always a sucker for these! My favorite coins to collect are the odd denominations they don’t make anymore, and these 3-cent pieces are just super cool and REALLY tiny (though not as tiny as my 1 and 1/2 Pence piece from Great Britain, circa 1836!).

I picked this one up for $24.00, and it’s book value is probably around the $35 range. I’ll see if it beats the condition of my other 3-cent pieces I already have, and if not it’s going right into the trading binder for later. Though I don’t mind holding onto in the meantime… they’re so pretty! 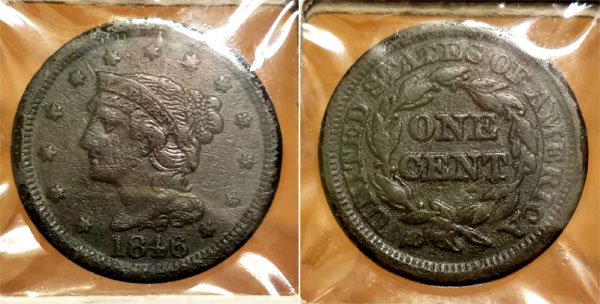 I used to own one of these, but somehow over the years I’ve traded it away. So when this Large Cent came up on the market in roughly the same condition as my old one (Fine) I took it home with me for $17.00. Red Book has it listed for around $30.00, so I was pleased with it.

Now let’s see if I accidentally trade it away again ;)

This one was MY FAVORITE of them all! It took me a while to catch on that it wasn’t *exactly* a token, even though it’s now classified one, but after some quick Googling I finally figured out what it was! A WEIGHT! Like, in which you measure stuff against!

Here’s a snapshot of the card that came with it that helped with the search: 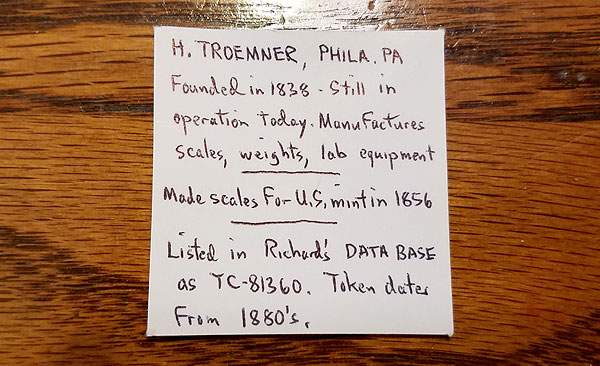 If it’s hard to read for some reason, here’s the text:

And then here’s a clip from CoinSite.com that explains how they were used:

“In the days before electronic scales and prepackaged medicines, pharmacists used a balance beam scale to measure the appropriate amount of medicine to a customer. One would put the appropriate weights on one side and then pour the powdered drug on the other until the balance was centered.

Small drachm (a unit of weight equivalent to 60 grains or one eighth of an ounce) weights, grain weights and smaller were employed to balance the small amounts of chemicals ordered by a doctor’s recipe or prescription for each dose. Since the weights were base metal, mostly copper, the drachm weights were often gold plated to make them easier to read.”

So fascinating, right??? And the “3ii” on it signifies 2 drachms, while the “Phila” is Philadelphia and the “H. Troemner” obviously being the name of the store. Tokens like these are also classified under “exonumia” (i.e. numismatic items other than coins and paper money).

Unfortunately it’s not worth much more than the $2.50 I paid for it, but if you can find in-tact kits that include ALL the weights which this was a part of, *as well* as the balancing scales and even wooden box they all come in, well, you’d be sitting a LOT prettier. And plus it’s a helluva lot more fun to play with and show people I’d imagine :)

You learn something every day in this hobby, I tell you…

Hope your collecting is proving equally as interesting too! Feel free to share any recent pick-ups of your own in the comments below.