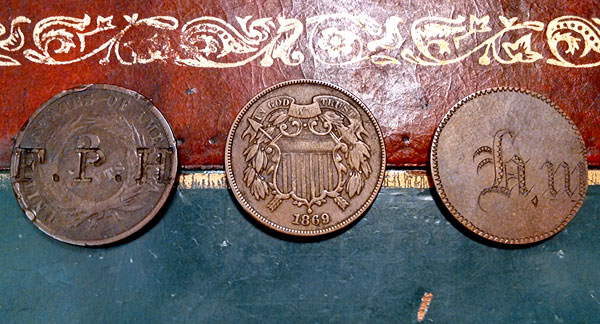 I don’t know why, but I’m obsessed with the odd denominated coins of our past. Particularly two cent and three cent pieces. They’re just so cool and, well, odd looking that whenever I see someone looking to part with ’em I usually can’t help but to start bartering :)

And last night was no different. Though, I didn’t realize until I got home that all 3 coins I picked up were actually two cent pieces! Haha… I made two separate deals that randomly happened to involve these two cent coins which is fine by me. You can read up on the history of them here in an older post I did aptly titled, “my two cents.”

As you can see, two of those above look different than the normally circulated coin (the middle one). The left is what’s called a “punched” or “counter stamped” coin usually done by companies and shops for advertising purposes (technically ruining the coin’s value, unless you happen to be a collector of them), and the one on the right is a “love token.” Where people would hand-carve pictures and patterns, and especially initials of their own names to then be handed to their lovers as “tokens” of their love. Especially as they went off on trips or to war/etc.

I’ve been fascinated by love tokens for a while now, but this is the first one I’ve actually ever gotten which made me excited. It’s not as pretty as those I’ve seen before (check out these bad boys!), but it’s definitely a fun little addition to my collection :) You can learn more about love tokens at LoveTokenSociety.com.

Here are the details of all 3 coins:

Here’s what the revers sides of all three coins look like: 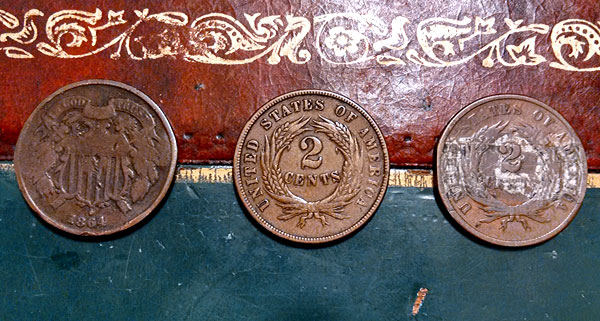 Here’s what I traded for the two odd ones: 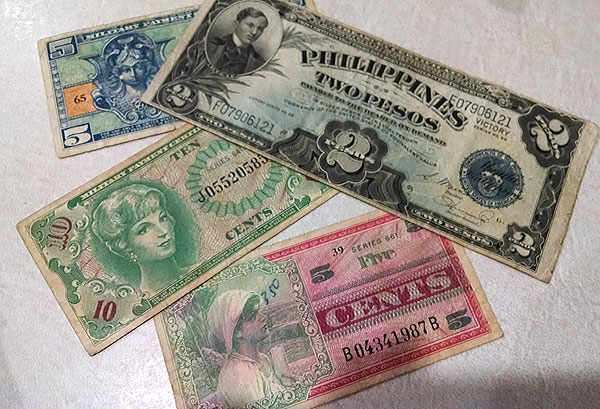 You might remember some of these from our old post on Military Payment Certificates :) Which I picked up for about $5 worth of trade. And then another $1.00 or $2.00 for the Philippines Two Pesos “Victory” bill – printed in the United states back in the day! They look pretty similar to our old ones, huh? They’re called “Victory” notes because after the liberation of the Philippines under Japanese rule in 1944 the backs were all overprinted with “VICTORY” on the notes.

So for about $6 worth of notes I came away with two awesome two cent pieces making it a steal in my books. I’m more of a coin collector than I am a paper currency collector anyways, so the idea of trading 4 items for 2 was an extra plus on the trade. My favorite thing to do is to trade/sell a bunch of items in exchange for just one or two not only cuz the value of the coins you get are worth more, but it also condenses your collection so it’s easier to manage (here’s how I store everything fyi). For a guy trying to practice minimalism, this helps out a lot :)

I’m not much a fan of the more modern coins, so now they belong in a home with somebody who does. It’s pretty funny too – I went from having zero two cent pieces 5 months ago to now having 4 of them! I’ll probably go on to trade some of them as time goes on, but for now they’re interesting additions to my collection.

Hope yours is growing in fun ways as well!