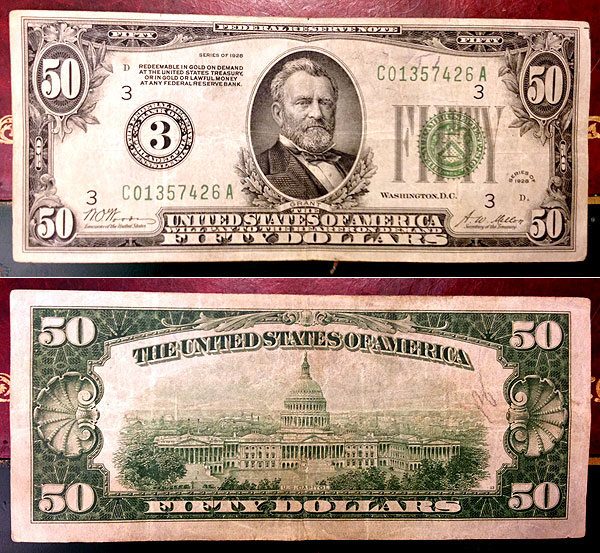 Oh man, just came across a couple of old bills I picked up the other month while cleaning up my desk. A $50 bill from 1928, and a $5 bill from 1934. You don’t see those every day! Nor such clever blog titles, right? ;) ‘Cuz Grant and Lincoln are featured on these bills? Sigh…

Here’s the story of how I came to own them:

Then once at home, I hurry to look them up in my Guidebook of United States Currency to see what I’m the new proud owner of, and here’s what I find:

I’m not sure how to incorporate the writing marks on either bill when it comes to grading, but I gave it the ol’ college try. I feel like they’re just pencil marks anyways and could probably even be erased off lightly? No way I’m going to try, of course (cleaning coins/currency is a cardinal sin!), but you do have to wonder about these things ;)

Regardless, they make an excellent addition to my currency collection, of which now I have around 5 pieces I believe. Outside those Military Payment Certificates I recently picked up (I’ll probably re-trade them at some point). 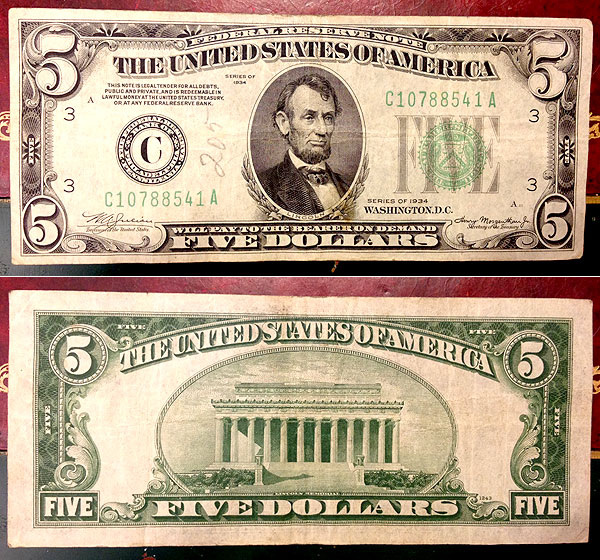 I find the text in the upper left of both these bills pretty fascinating. The paragraph on the $50.00 bill states:

“REDEEMABLE IN GOLD ON DEMAND AT THE UNITED STATES TREASURY, OR IN GOLD OR LAWFUL MONEY AT ANY FEDERAL RESERVE BANK.”

While the paragraph on the $5.00 bill reads:

“THIS NOTE IS LEGAL TENDER FOR ALL DEBTS, PUBLIC AND PRIVATE, AND IS REDEEMABLE IN LAWFUL MONEY AT THE UNITED STATES TREASURY, OR AT ANY FEDERAL RESERVE BANK.”

As you can tell, times were a lot different then. Guess they wanted to make sure people knew the money was real and not to worry, eh?

I thought it would also be cool to compare these guys to more modern day bills as well. So you can see the difference of the major designs over the years :) 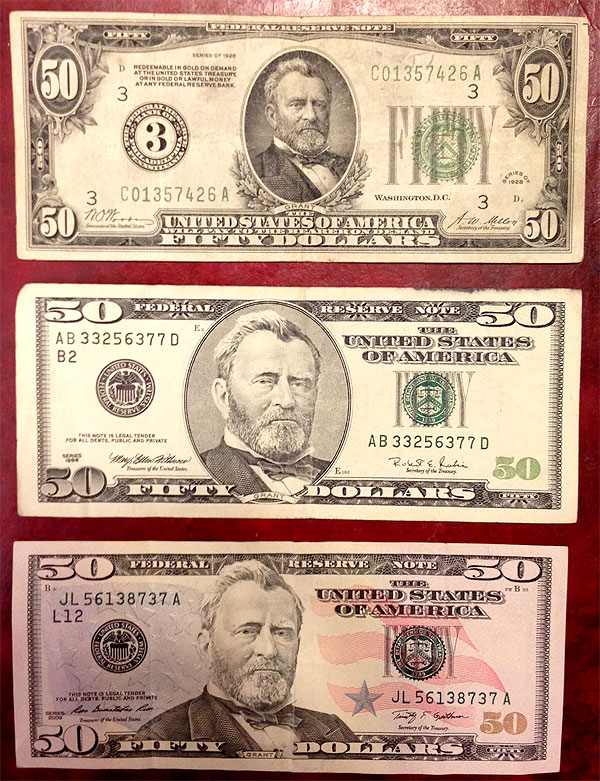 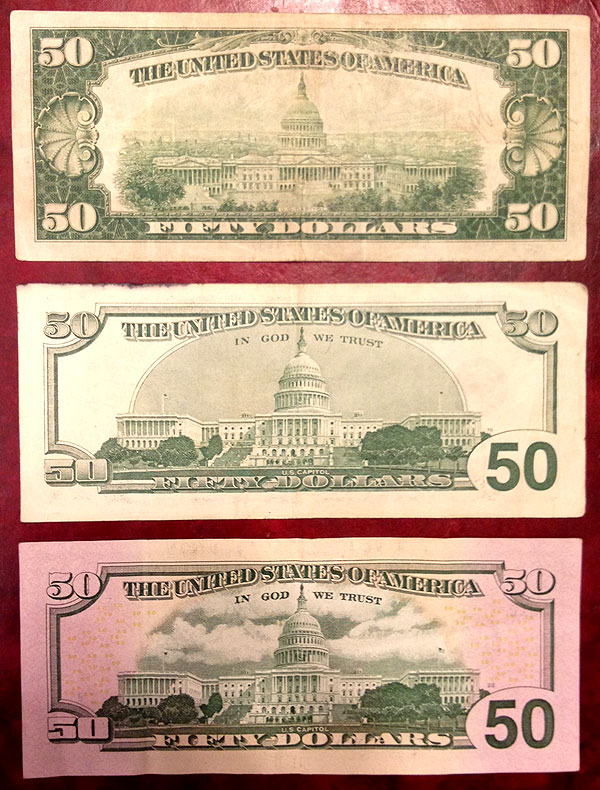 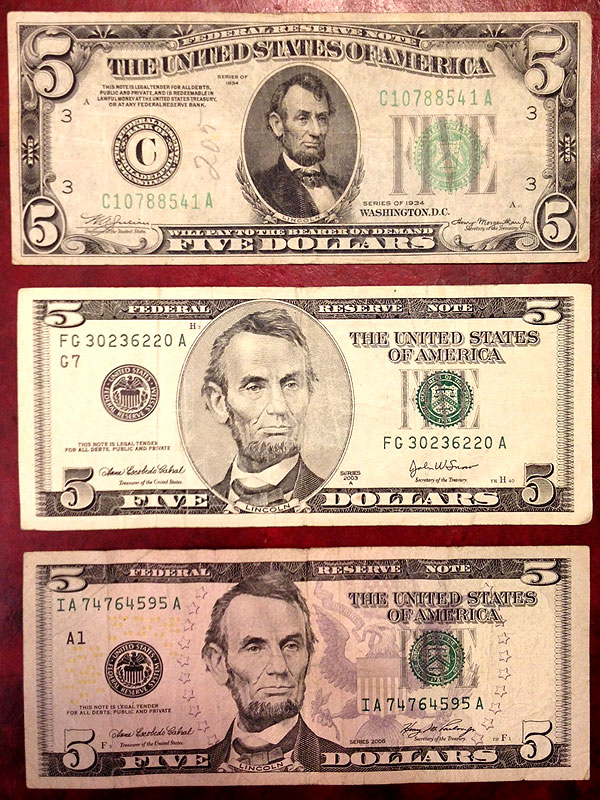 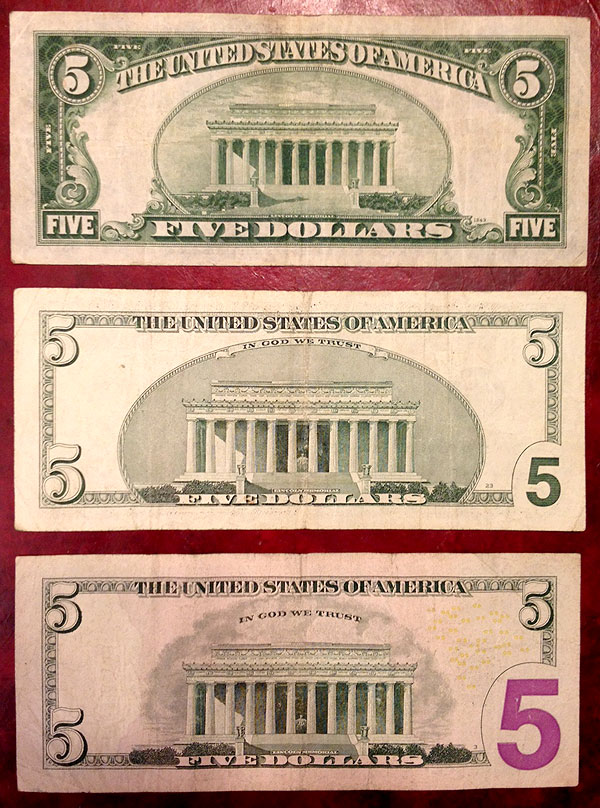 Pretty drastically different! If you’re one to pay attention at least :) And really makes me miss the older more elegant looking bills too. Not much a fan of the new stuff, ugh…

This also reminds me of that last $20.00 bill I picked up. Same design just 60 years newer. I’ll have to make it my mission to find an older version of that one too to match my new friends here, and then snap some history pics of those as well! I bet you can’t wait!

—-
PS: Sorry for the lighting with these pics – took them in my office at night and didn’t have the patience to wait for daylight ;)