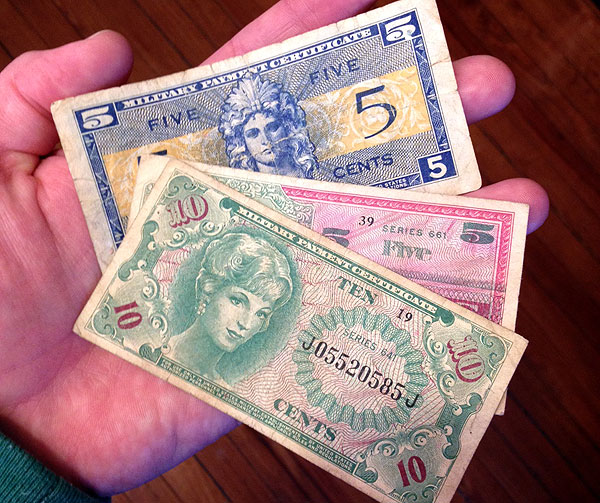 I picked up these bad boys in a recent trade with my friend (the same one who got my $5.00 star notes and also gave me that sexy 2 cent piece), and I really had no idea of its history until I sat down to write this post. They’re kinda cool looking, and very small as you can see in that pic up top. They look very European.

Here’s a quick rundown on what they were used for back in the day, via good ol’ Wikipedia:

They come in denominations of 5 cents, 10 cents, 25 cents, 50 cents, 1 dollar, 5 dollars, 10 dollars and 20 dollars. And interestingly enough, they were devalued once a new series was issued. So if you didn’t want to get stuck w/ worthless money, you had to either spend it or exchange it for the new series before you got caught with nothing in your hands!

Here are the details on mine:

As pretty as they look, though, most of them are not that valuable :( I picked ’em up for a dollar or two a piece, and you can find handfuls of them for sale at eBay for the same (I was hoping they’d be featured in my currency book, but they weren’t. They are cataloged and priced in this one, however: A Concise Catalog of U.S. Military Payment Certificates).

Rare (& Possibly Valuable) Military Payment Certificates to Watch Out For

According to AntiqueMoney.com, THESE are the guys you want to be holding and looking for while out shopping around. They’re much rarer and have a better shot of being worth something good:

Pretty much any note below $5.00 isn’t worth much (like mine which are only 5 cents and 10 cents), but once you hit $5.00 and up – especially those specified  above – you have better chances of having something good on your hands. As long as they’re in decent condition, of course – just like with anything else collectible.

Also, if the serial number on your bill does not end with a letter then you have what is known as a *replacement note.* And these can be worth some more too.  (Similar to the star notes of our main US currency)

So. Nothing too crazy added to my collection this round, but definitely something new and interesting. Anytime you can learn more about our country’s history it’s a win in my book. Especially when it’s through collecting :)

Here are the fronts and backs of my new friends: 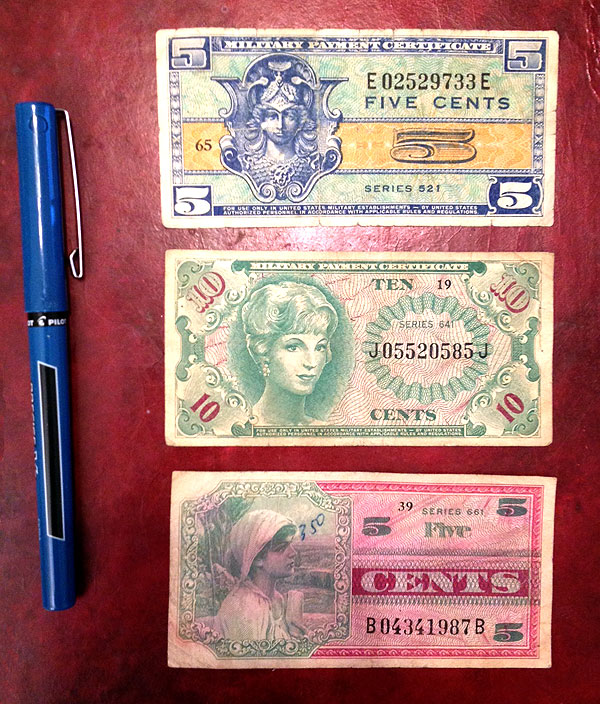