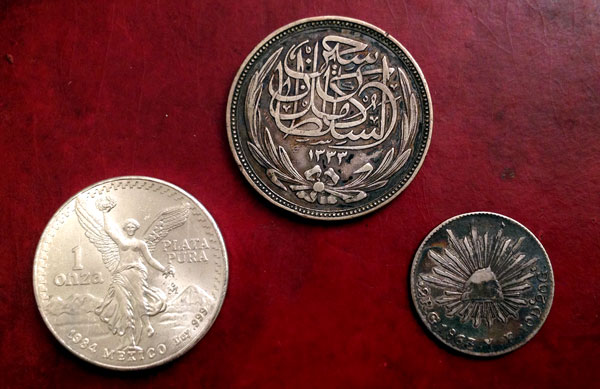 I picked up 3 new foreign coins to add to my collection – with one of them being a Mexican Reale (ya see what I did there?). I’m typically a U.S. collector, but when I’m shown beautiful old coins I just can’t help myself :) Especially when giving away mint sets that I could care less about (not much of a modern guy).

Here’s info on each of these three new coins:

And here’s what I traded for them:

A fair trade for both of us I think, maybe slightly skewed my way. But again, when you’re getting rid of coins you don’t really like you get okay with stuff like that :) And for my friend, he’d rather have the mint sets and a cple pennies over foreign ones. So win-win!

Here’s a snapshot of the edge of that 1 onza – I thought having “LIBERTAD” there was cool: 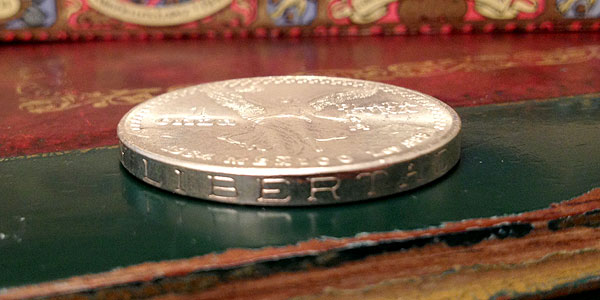 And then here are the reverses of the 3 coins: 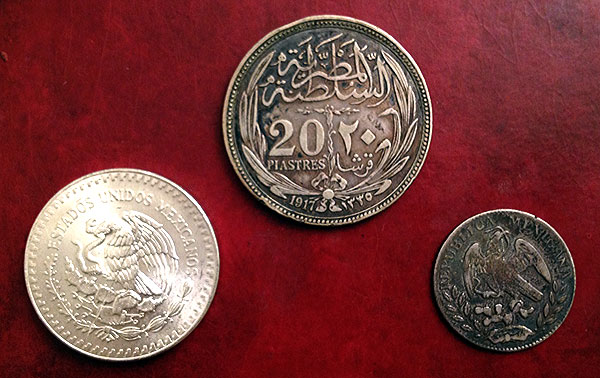 Now just like those last pics I shared on my 1800’s toned coins, this one main shot here doesn’t do that Reale any justice. So here’s a closeup of the obverse/reverse here as well:

See the rainbow?? Damn I love that stuff… Which is funny because two years ago I thought most toning was ugly :) Guess your tastes change over time, eh?

Picking up this latest Reale reminded me of a much larger one I got two summers ago. That same guy who introduced me to the world of coins would always try to hawk his random beat up ones my way too :) Especially the foreign coins since none of us ever knew what they were worth.

Usually I turned them down, but this one time I came across this big clunky looking one and could have SWORN it was made up of silver. He was 50/50 on it so we decided to make it  $5.00 gamble and see what happens. If there was no silver in it, he’d have won out cuz the coin prob wouldn’t be worth much in numismatic value, but if there was I’d win out since at the time silver was hovering around $30 (It’s now around $20).

As you probably have guessed by now, there WAS silver in it. And a lot. Exactly .786 ounces, almost a full ounce! So my $5 deal turned into a whopping $25ish one :) Tuns out most silver-ish looking coins from the 1800s contain silver, especially Mexican ones – so a good tip to file away!

[Funny side note: After this deal I picked up 3 other foreign coins from this same friend on silver bets and lost every single one of them, haha… so in the end we both probably broke even ;)]

Neat right? The edging is my favorite – looks like tire tracks! And it’s a large solid coin too, making it even more intriguing. This one’s in my box collection.

So, to answer the question posed in today’s article title – Yes, I am very much for Reale! ;)