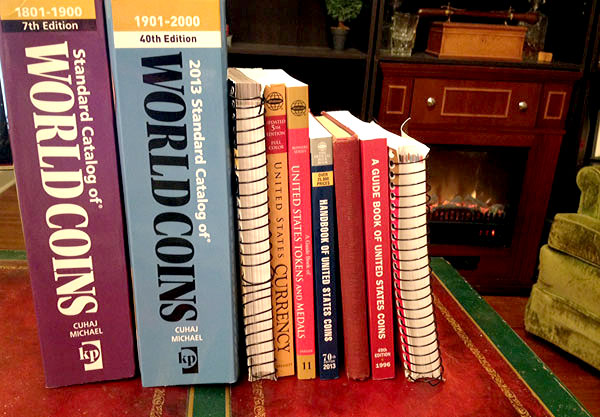 Welcome to the library! These are all the books and resources I use to get an idea of what a coin or U.S. paper bill is worth. You’ll see those massive World Coins books on the left to give me a picture of foreign values, as well as a handful of U.S. coin-related value guides on the right.

If you ever want help looking up a coin, lemme know! Happy to pop open one of these bad boys for you and check it out :) Just shoot me the info you have, as well as a picture if possible, and I’ll take care of the rest…

Here’s what my library holds:

So those are all my most up-to-date reference books I have currently. But you’ll notice a few others up at the top including a REALLY old one (and my personal favorite!).

These are my older reference guides:

I’ll update this over time as I get more… but I think it’s time to start spending money on coins now, over books ;) Holler anytime if you can use any of these!