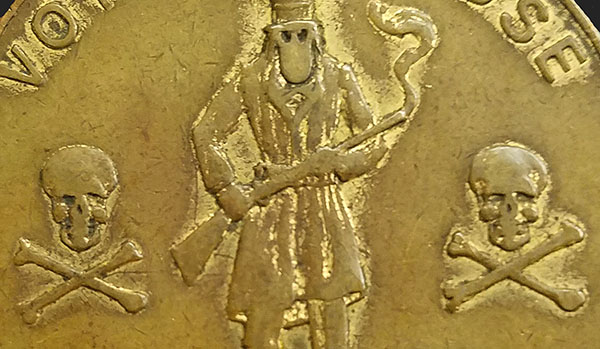 What up what up! Came back from our coin club last night with a handful of new tokens I accidentally picked up :)

So hard to deny though when there’s pictures of BEER and SKULLS on them!! When do you ever find those on coins???

Here’s some pics on them all, along with a little research I did:

This one was my favorite of all of them. I love the design of both sides, and just how worn down it looks – giving you that sense that it was used for years and years back in the day. Probably kept in someone’s pocket to help pass the day!

Love the lines on both sides of the token too:

I guess that’s how people coped during the prohibition era? :) Here’s some info about these “Crusaders” who produced these tokens too – via Tipsico Coin (linked article also shows better quality versions of the tokens, if you want to see what they looked like in their heyday):

“1930’s era anti-prohibition advertising token issued by the Crusaders, a Lake State-area political group. They were founded in 1929 as a response to the obvious failure of the 18th Amendment; the instigating event was the infamous St. Valentine’s Day Massacre. This served as both a “good luck” token of the general sort, as well as a political piece in the crusade to repeal the 18th Amendment. The notation of “5 Cents” is likely just to refer to the traditional “5 Cent Beer” and not to serve as a merchant token, as it carries no specific merchant advertisement.”

Getting thirsty just typing all this out!

Another cool alcohol-related token! And this one a “spinner” token which I never heard of until I started researching…

See that little circle bump in the left-hand picture there in the middle of the token? Apparently you lay that flat on the table and then spin it, and then wherever that arrow lands on the upward facing side of the coin (right-hand pic) is the person who gets to pay for the next round of beer :) If only they had these in the 90s when I was in college!!!

But get this – that “Brown-Forman Distillery Co.” company? It still exists! Here’s a little about its background via their website:

[In 1870] With $5,500 in saved and borrowed money, George Garvin Brown, a young pharmaceuticals salesman in Louisville, Kentucky, starts J.T.S. Brown and Bro. with his half-brother. They sell whisky in sealed glass bottles to assure its quality, an innovative approach at a time when whisky is commonly sold by the barrel. Old Forester Kentucky Straight Bourbon Whisky is the flagship brand.

After several name changes and the dissolution of the original partnership, George Garvin enters in a partnership with George Forman, his accountant and friend, and Brown-Forman is created.

Then check this out – tell me if you recognize any of these brands! [From Wikipedia]

The Brown-Forman Corporation is one of the largest American-owned companies in the spirits and wine business. Based in Louisville, Kentucky, it manufactures several well known brands throughout the world, including Jack Daniel’s, Early Times, Old Forester, Woodford Reserve, Canadian Mist, GlenDronach, BenRiach, Glenglassaugh, Finlandia, Herradura, Korbel, and Chambord. Brown-Forman formerly owned Southern Comfort and Tuaca before selling them off in 2016. As of fiscal 2016 the company had sales of $3.08 billion.

Jack Daniel’s! These spinner tokens must have really helped them market, haha… 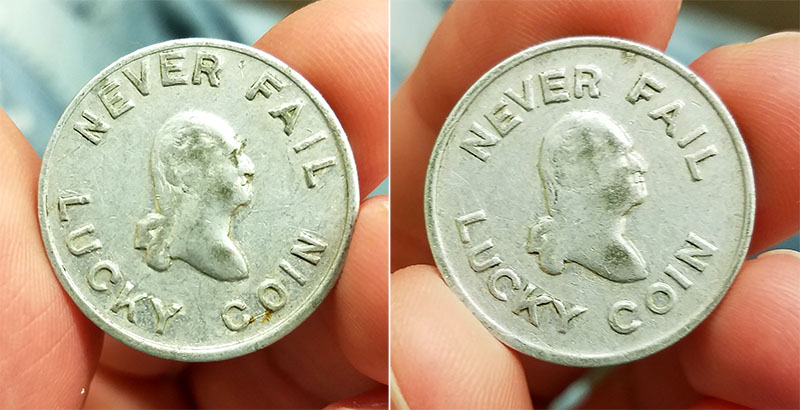 This one I just find cool due to its simplicity. From its unassuming aluminum composition, to the portrait and slogan that matches George Washington all too well – “Never Fail.” He probably hates having his image everywhere as he was a pretty humble man, but lucky for us it helps his aura live on :) 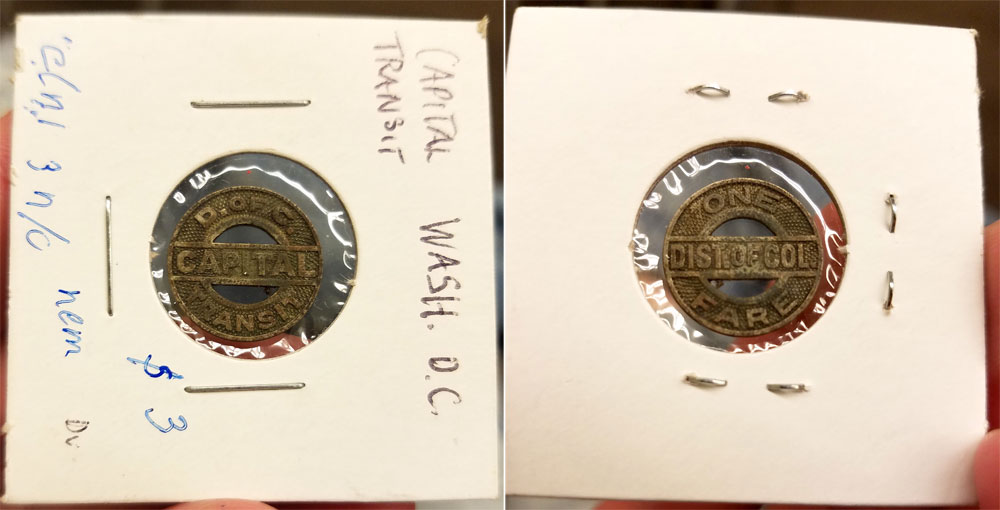 Moving away from drinking and onto riding (because you know – no drinking and driving! Zing!) we have a token from the Washington DC Metro system that I picked up because I’m a sucker for all items tied to areas I’ve lived :)

I had a hard time trying to figure out whether this was a subway token or a bus token, but the little info I did find showed it to date around the 1930s-1950s, and my guess would be that it was a bus token vs a metro one. Since my findings also showed that the DC metro took advantage of technologies earlier on than most other metro systems out there.

I love the grittiness of this token though, and especially that big bold “CAPITAL” across the center of the obverse there as if to proudly boast about it to the world ;) These guys were given in exchange for one fare/ride, and nowadays seem to be used more for pieces of vintage jewelry than anything else. At least if Etsy is any indication. 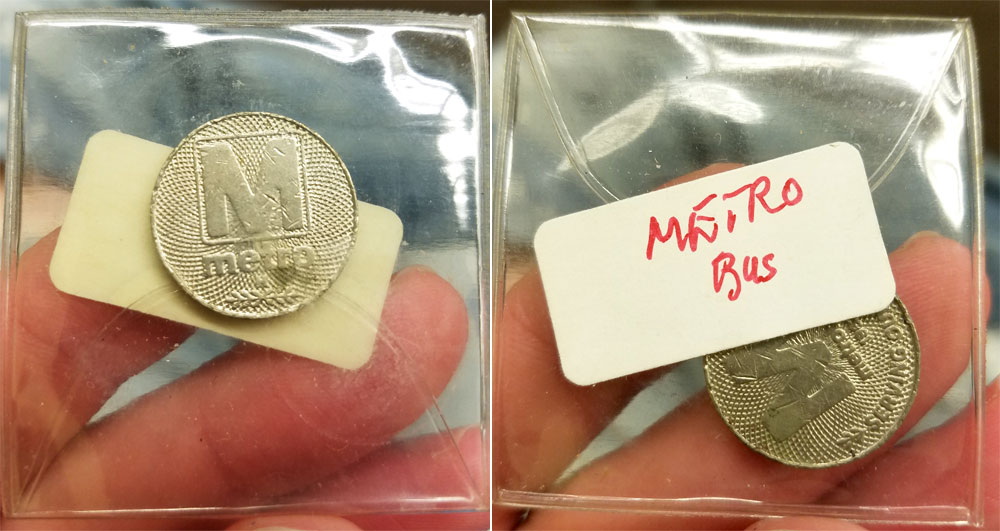 This one is definitely a bus transportation, and I know that because it literally says so on the reverse there ;) The picture doesn’t show it well (sorry about that – just love all the different containers coins and tokens come in when you pick them up, and figured I’d feature them here!), but there’s clearly a “Metrobus” word protruding from the reverse, as well as the date of “1982” which I also appreciate as a collector.

It’s nice to know how old or not these guys are!

And while they’ve been phased out of being sold to the general public, Metrobus says you can still use them, so technically I got a great deal here picking it up for only a dollar when fares these days cost two ;) 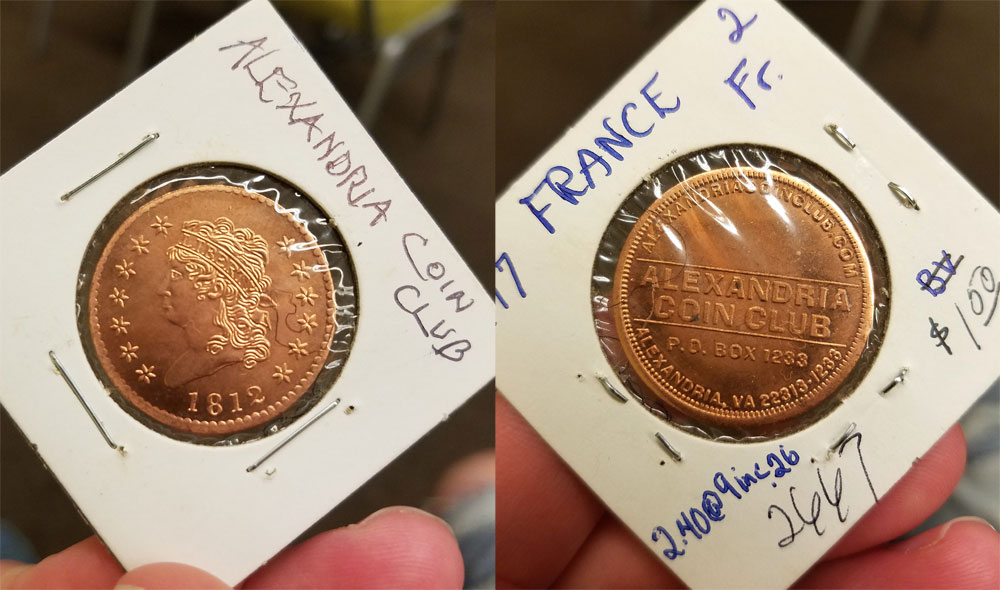 Lastly, I picked up this cool looking coin club token, again because it’s from the Washington DC area. And although their website listed is now defunct (the downside of casting it on a coin – hah!) at least Google will set you straight and forward you over to the right address: AlexandriaCoinClub.org. (They switched from a .com to a .org)

I also like how the collector re-used a 2×2 that used to house a French coin in the holder instead, haha… Talk about frugality! Though sadly its come to the end of its life as I had to quickly destroy it as that dang stray hair was driving me crazy!!! Did you notice it there in the left-hand picture?? All black and curly? *shiver*

So that’s my latest pick up over here.. how about you? Anything good – or random – come into your collection lately?

My favorite part of this hobby is just never knowing what you’re going to come across along the journey… and even better when you can scoop up a half dozen coins for only $10 bucks!