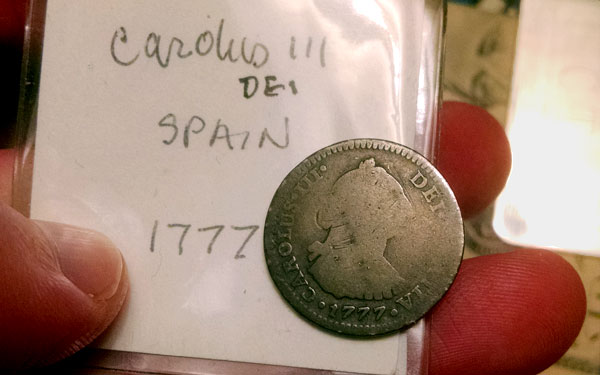 Picked up a few coins at our latest coin club auction and thought you’d enjoy checking them out.

In pursuit of finding older – different – coins for my collection, I came back with the following:

I picked this up for $10.00, and the card with it noted it was AG/G condition worth about $10.50. It’s def. not the most pristine coin, but I love love LOVE how much history oozes from these colonials! Imagine how many hands have held this over the years? It’s almost 250 years old!

The obverse showcases a bust of Charles III with lettering – “CAROLVS III DEI GRATIA”, which means “Carlos 3rd by the grace of God” (Cool!), and the reverse features a crowned shield flanked by pillars with banners. The lettering there says “HISPAN•ET IND•REX” which translates to “King of Spain and the Indies.” Shout out to en.numista.com for the info.

This bad boy stood out to me because it looks so much like a GOLD coin! And it too is over 150 years old. I had no idea what “spiel marke” meant when I first picked it up (won it for $3.50, and the card noted it’s approx. value at $5.00 in XF condition), but upon further research I found out it was actually a gaming token :)

Here’s a note about them via CoinSite.com:

“Spiel= play, marke = money. Spiel markes were counters or game pieces. They often imitate contemporary coins but leave out the correct legends or denomination to avoid the accusation of counterfeiting… Spiel Markes were popular with children as play money. The tokens also became a popular advertising vehicle and were often included political messages. Spiel Markes or similar tokens became substitutes for small change in many countries, including in the United States, during periods of economic chaos”

I love the eagle on the obverse too, and from what I found about ‘Jeton’ it seems to be a French name for these types of coins that were also used to help kids learn how to count.

I liked the reverse of this one with the key and shield like that, but I really picked it up for a few friends who collect older German coins – and especially notgeld (German for “emergency money” or “necessity money”):

“Notgeld refers to money issued by an institution in a time of economic or political crisis. The issuing institution is usually one without official sanction from the central government. This occurs usually when sufficient state-produced money is not available from the central bank. Most notably, notgeld generally refers to money produced in Germany and Austria during World War I and the Interbellum.”

If there’s one thing this hobby continues to do, it’s amaze me with all the ways we use money over the years – and around the world!

So much history around these guys, whew…