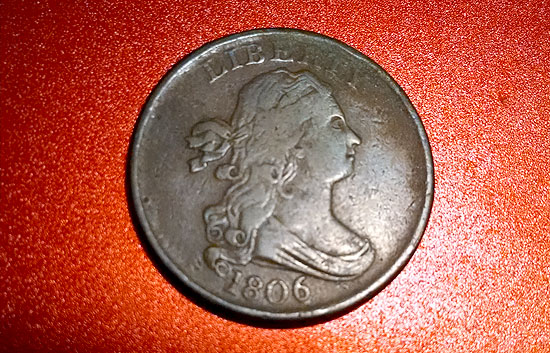 This is the latest jewel in my collection, and one I’ve been trying to get off a buddy of mine for a while. I’m not sure if I just caught him in a good mood, or my offer this time around was better (or, perhaps, he just got tired of me pestering him about it!) but either way she’s now in better hands and my coin family welcomes her :)

And what great condition she’s in after being alive for over 200 years now! Pretty incredible! In the world of coin collecting she only grades a VG (Very Good) – which is far from being perfect – but still, generally speaking she’s a beautiful specimen. And there were only 350,000 of ’em made in 1806 too – making it relatively rare. (To put things in perspective, pennies these days are pumped out at over 3 BILLION every year, which will never be rare… so don’t even bother hoarding those).

Here’s another look at this busty half penny:

(You’re not supposed to touch coins since our skin is so oily, but I can’t help do it at least once before safely securing them away in plastic… that’s half the fun of collecting! And I figure they’ve lasted this long, what’s one last touch? :))

Much prettier than Abraham Lincoln’s mug, I must say… This was back before the U.S. featured real people on its coins though. Which, coincidentally enough, Abraham was the first! (On “circulated” coins, anyways…)

Here’s what I ended up trading for it: 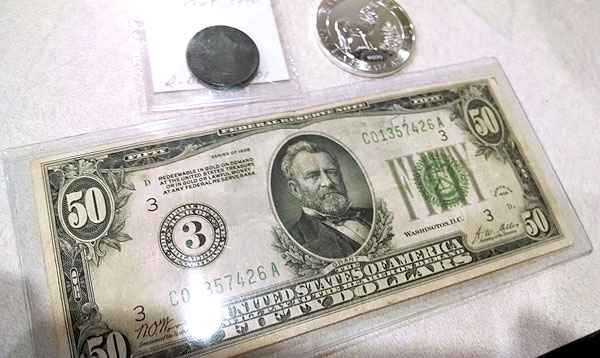 You might recognize both of those items (the one in the upper left is the half-penny):

I then threw in a crisp $20 bill to seal the deal – giving him a total value of about $105.00. And the funny part was I literally did a trade 5 minutes earlier to GET this same $20 bill which meant I really didn’t apply any money towards the deal! (Well, except for the $50 bill, but that doesn’t count as “usable” money). 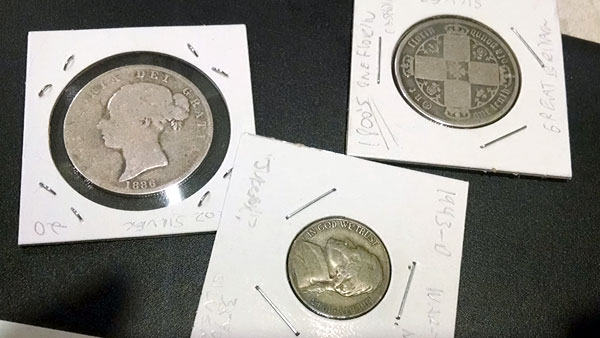 Two not-so-great quality British coins from the 1800’s (worth around $15-$20 a piece since made of silver), and a 1943-D “war nickel” when we were producing nickels out of partial silver for a short while. These are worth around a buck for just the silver, and possibly more depending on the year, mint mark, and of course grade. So overall I picked up $20 in cash for around $40 worth of beat up coins. Could I have gotten more from someone else? Possibly. But then again who’s in the market for low quality, un-rare, coins?

So overall it was a fun night of trading and talking shop with some friends. And anytime I get to offload a bunch of things for just *one* is a double win in my books. The mission is to only have coins I REALLY LIKE in my collection to hold on to, and to trade away/sell the rest. And with this 5 to 1 deal here we accomplished just that :)

How is your collection going? Anyone else pick up something new and cool?